Twenty-twelve was a fascinating year for myself, astronomy, and science.  There were many scientific milestones reached and important events during the last twelve months, most notably, the we survived the bedlam that was the Mayan apocalypse.  I thought I’d take some time to compile the best moments from 2012 in astronomy and space science and look ahead to 2013 hi-lighting the known astronomical events coming up.

First on the list is the impressive conjunction of Venus and Jupiter from March 15th.  On the date famous for the murder of Julius Caesar we were treated to two Roman gods forming a conspiracy of their own in the sky.  Venus and Jupiter, the two brightest planets in the solar system respectively, passed extremely close to each other (from Earth’s perspective), just 3 degrees apart.

Venus-Jupiter conjunctions are fairly common, occurring roughly every two years.  The next conjunction will be on May 28, 2013 and will be even more eye-catching when the two planets pass just one degree from one another.  Even more spectacular will be the conjunction in 2014 when the two pass only one-fourth of a degree from each other!  To put that in perspective, the width of the full moon is about one-half a degree in apparent size, so the 2014 conjunction will place the planets half a moon width apart!  I hate to build you up for these two conjunctions though, because neither will be visible from the Northern hemisphere.  If you can wait 53 years, until 2065, you’ll get to see the best of all planetary conjunctions:  a transit, when Venus passes in front of Jupiter in its orbit.  I may be alive but I’ll be quite an old man by then.

The next highlight from 2012 is something, if you saw it, you’ll likely never forget…the transit of Venus.  While my own luck observing the transit was less than optimal, I did get to view it briefly and it was amazing.  On June 5th, 2012 Venus transited, or passed in front of the sun appearing as a small black disk silhouetted against the fiery inferno of the sun.  There were some truly remarkable pictures of the transit taken by professionals and amateurs alike.  What made this event so special was the rarity of it and its historical and scientific significance in past centuries.  A transit of Venus takes place in pairs every 121 years then 105 years to form a cycle of 243 years.  Venus crosses in front of the sun once a year in its orbit but it’s only during these cycle years that it can actually be seen from Earth due to the two planets orbits being slightly inclined.

Venus transits have been historically significant to the world of science for centuries.  The first transit to be observed with a telescope was in 1639.  British scientist Jeremiah Horrocks used the transit that year to make a much more accurate calculation of the Earth’s distance from the sun using angles of parallax and geometry.  The 1769 transit was led to the discovery of an atmosphere on Venus.  Legendary explorer Captain James Cook observed the transit that same year in Tahiti at the still named “Point of Venus”.

The next event on the list is the occultation of the moon and Jupiter on July 15th, 2012.  Only observers in Europe, the Middle East, and northern Africa were able to view this majestic event but the images produced from it were spectacular.

Series of images from the Jupiter-Moon occultation from Lebanon Credit: AstroZ1 on Flickr

The next event on my list is the one that I was looking forward to the most.  Curiosity.  I had been eagerly anticipating Curiosity’s landing on Mars for over a year and on August 5th it finally happened.  Due mostly to the unprecedented entry, landing, and descent plan Curiosity was intriguing from the word Go!  The sky crane and powered descent was daring and risky but it proved a massive success for NASA.  Not to mention the fact that Curiosity is the most scientifically advanced planetary rover yet.  The rover is practically a fully functioning mobile chemistry laboratory.  Within days of its landing Curiosity sent back some of the most stunning and detailed images of the Martian surface we’ve ever seen.

The final two events on my list of memorable astronomical events of 2012 both happened in the month of December.  First off is the mighty Geminid meteor shower of three weeks ago.  The peak of the shower combined with a new moon allowed for some excellent viewing.  The expected rate was all the way up to 120 per hour!  I went out for about one hour between 10:30 and 11:30 under moderately light polluted skies and was able to count 55 meteors.  I was quite impressed with the shower which included several fireball meteors with long, smokey trails.

I suppose the last event can’t really be confined to the month of December 2012.  It actually spans over a length of several years but it came to a conclusion just a couple days ago.  Of course I’m talking about the apocalypse!  You might have called it Judgment Day, the Rapture, or simply the winter solstice, but there was an inordinate amount of hype surrounding the long-dreaded end of the Maya calendar.  This event in particular is in reference to the way people with degrees in physics, astronomy, geology, cosmology, ontology, biology, paleontology, gynecology, urology, you name it, refuted the claims of doomsday made by people who are less intelligent.  Two people/organizations come to mind when I think of leading the fight against stupidity:  NASA and astrophysicist Neil deGrasse Tyson.  Turns out people were actually believing the convoluted claims of doomsday 2012 and the world was indeed in danger…from stupidity.  So hats off to you NDT and NASA for saving the world! 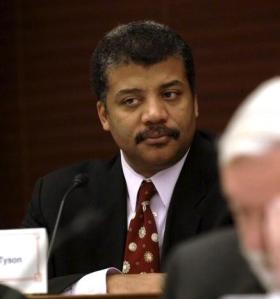 So that wraps up my 2012 rewind.  This past year has truly been remarkable for astronomy and science.  2013 promises to be just as exciting.  Stay tuned over the next day or two as I’ll preview the two excellent comets coming up in the next year.

Brace Yourself, The Venus Transit is Coming!

Yes that’s right!  A little over 24 hours remain until the most spectacular astronomical event of the year!  However, make sure you check the weather forecast for your area before venturing out to watch the transit.  The entire east coast and much of the southeast of the USA could be blanketed by showers and overcast skies most of the day tomorrow.  If you’ve been building up your excitement for the past several months like I have, start to release that excitement because there is a strong possibility that as much as 75 percent of the country won’t be able to see the transit due to bad weather.  Even though the transit is over 24 hours away, as I watch the grey clouds roll in I’m beginning to get that deflating feeling like I had a Venus-sized balloon of excitement for the transit and now someone is rapidly letting all the air out of that balloon.

Rain or shine I’m going to be watching the weather minute by minute to find out what’s going on.  Don’t abandon your plans quite yet.  You really never know with the weather.  There may be a break in the clouds long enough to watch the ingress of the planet.  Regardless, I tested my homemade solar filter yesterday morning and I must say that it works to perfection!  I opted to make one myself instead of buying an expensive one from a vendor.  I used the visual density Baader Solar film from Astro-Physics and constructed a housing for it. 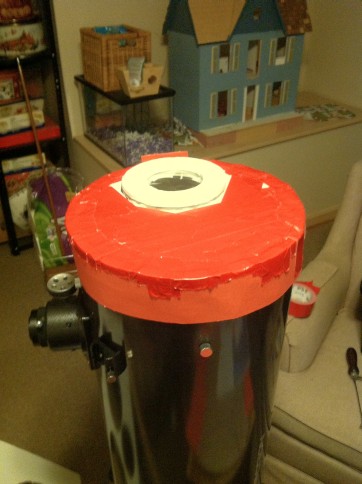 The resulting image was spectacular!  Even though it was hard to get a full image of the sun on my phone’s camera I could still see it perfectly through the 25mm eyepiece.  I suspect it has something to do with the fact that the aperture is now offset and a lot smaller than the normal aperture.  A great deal of detail could be seen on the sun such as sunspots 1497, 1496, 1493, and 1494, as well as a strange black smudge near the center of the disk which I’m not sure about.  The resulting image is much dimmer than the sun funnel technique and I think provides much better contrast on the surface for defining sunspots.  Regardless of whether I can view the transit, I’m very pleased with my filter and hope to get lots of use out of it.  Heck, I only used a small bit of the Baader film so I can make more if I want!

Partial image of the sun’s disk

My fingers are crossed for good weather and if you’re planning on viewing the transit best of luck to you as well!  Clear skies!

In preparation for the upcoming Venus transit on June 5th I was looking at cheap, but effective ways to view the sun with my telescope.  I wasn’t very interested in buying a full aperture solar filter for my 10″ scope so I was thrilled when I found www.transitofvenus.nl.  The accessory proposed on this site is the sun funnel, a rear projection, group viewing tool for the viewing the sun.  The sun funnel is very easy to make and costs just about $20 to make.

The funnel consists of a large fuel funnel, rear projection screen, two hose clamps, and an eyepiece.  I say it costs about $20 assuming that you own a telescope eyepiece already, if not you’ll have to pay a bit more.  You don’t need an expensive eyepiece, just one that fits the focal length of the telescope and the length of the funnel to give you an optimal image size.  More info on the eyepiece can be found on the website.  The rear projection screen can easily be ordered online and costs about $17 for one square foot.

I put my sun funnel together this past Monday and attached it to my scope but alas, the sun had almost set and was behind the trees in my backyard.  I had to wait until Friday evening after work to get another good viewing chance, but I was not disappointed!  Once the image is focused correctly my 25mm eyepiece projected an image about 75% of the funnel’s diameter!  The image is still rather bright, but is by all means safe to look at with the naked eye (although sunglasses might make it more comfortable).

EDIT:  I would also highly recommend building an aperture stop of some sort to reduce the amount of light gathered by the scope.  You can use any kind of material really, but all you do is cut out a circle about 2″ in diameter in whatever material you’re using (a cardboard box works well) offset from the center so that you don’t cover up the secondary mirror (for reflectors).  This reduces the aperture of your scope from say 10″ to 2″ which is perfectly fine for viewing an object as bright as the sun.

Once set up the image of the projected sun is razor sharp!   As the picture below shows, once the image is focused on my phone the detail on the disk is stunning!  Several sunspots are visible dotting the fiery surface of the star.  In the center left and clearly visible is the large sunspot 1459.  Three other pairs of sunspots form an isosceles triangle around 1459 in the center.  Not bad for my first attempt at viewing the sun.  I’m really looking forward to viewing the transit through the sun funnel in less than two months!