The Hubble Space Telescope really is an amazing piece of machinery!  We are approaching the 22nd anniversary of Hubble next month so I believe a little tribute is in order.  For the last 22 years Hubble has been constantly blowing our minds with stunning images of our solar system, our galaxy, and the universe.  Named after the great 20th century astronomer Edwin Hubble, the HST was charged with unlocking the mystery of Edwin Hubble’s greatest project:  the expansion of the universe.  The observatory has since succeeded with remarkably accurate precision.

Without a doubt, Hubble is the great triumph of the Shuttle era.  From its infamously defective mirror correction mission and several repair and upgrade missions over the years, all made possible by the Space Shuttle; Hubble has proven to be tougher and more effective than anyone could have imagined in 1990 when it was launched.  With Hubble we have peered into the furthest visible depths of the universe and seen what we could have previously only imagined.  We owe so much of our knowledge of the universe to the images and data Hubble has sent back to us.  We’ve more accurately determined the rate of expansion of the universe, estimated the age of the universe, discovered ancient supernovae, and discovering that galaxies may have black holes at their centers.  Some of the most stunning images of our universe have come from Hubble.  The HST is known for its incredibly sharp visible light images.

The most recent image to be released by Hubble is one of Messier 9, a globular cluster about 5,500 light years from the galactic center in the constellation Ophiuchus.  The recently captured image is the most detailed ever taken of M9.  The photo shows a myriad of differently colored stars, which number in the thousands.  One can clearly observe several different types of stars in the cluster.  The hotter bluish stars crowd the center of the cluster while the cooler red/orange stars are scattered mostly around the edges.  M9 has a total luminosity of roughly 120,000 times that of our Sun while only occupying the space of a pin point at arm’s length in the sky.  At 25,800 light years from Earth M9 is one of the closer globular clusters to Earth.  Globulars are interesting to astronomers because they contain some of the oldest stars in the galaxy and are a remnant of the galaxy’s infancy and formation. 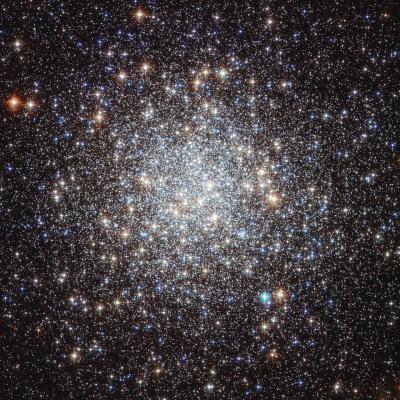 There are countless other images sent back from Hubble and I’m sure you’ve seen many of them.  Needless to say, Hubble surely ranks up near the top of NASA’s greatest hits.  The telescope is expected to remain in orbit and functional until at least 2014.  Hubble’s successor, the James Webb Space Telescope is expected to be launched by 2018 but delays and budget concerns have plagued the project for several years now.  Whenever Hubble de-orbits it will surely be remembered as one of mankind’s greatest scientific instruments.  Long live Hubble!