Marylanders of the Night Sky

In my home state, the small, over-populated state of Maryland, we are not really that well known for astronomy.  Maryland has a population of about 5.8 million people encompassing only 12,407 sq. mi., making it the 5th densest state in terms of population per square mile.  All those people crammed into such a small area makes for horrible stargazing conditions across most of the state.  If you look at this light pollution map you would have to drive at least an hour to get from Baltimore to the nearest patch of yellow either up north or across the Chesapeake Bay.  Our biggest (and perhaps only) claim to major astronomical fame is probably the NASA Goddard Space Flight Center in Greenbelt, MD.  That being said, I had no idea that one of the more important astronomical observations in recent history was made out in western Maryland.

On April 18th, 1972 amateur astronomer and Deep Creek State Park employee Gus Johnson was out with his telescope giving a tour of M100, the Virgo Cluster, to the minister of his church when he spotted an unusually bright star in the cluster.  He didn’t remember seeing it ever before or recalling it from any of the charts he used.  Mr. Johnson went back out the next night to observe the strange star again and compared it to several charts of M100.  There was nothing that bright to be found in that specific region of the cluster.  He immediately called the American Association of Variable Star Observers and alerted them of a possible supernova.  The AAVSO sent the word out and it was soon confirmed by Asiago and McGraw-Hill observatories.  Over the next several years with the use of powerful instruments such as the NASA Chandra X-ray telescope, scientists believe that Mr. Johnson witnessed the birth of a baby black hole.  That would make Mr. Johnson just the third person ever to have discovered a black hole outside of our galaxy by direct observation.

Mr. Johnson, now 73, said in an interview with the Washington Post in 2010 that he prefers to use smaller telescopes and “non-computerized” systems.  He owns a dozen scopes ranging from 1.6″ to 8″ so he by no means is on the cutting edge of telescope technology but he considers himself privileged to have observed something so rare and completely by accident.  He is proud of his discovery and hopes to make another eventually, but he isn’t holding his breath.

Mr. Johnson works as a volunteer at the Deep Creek Park in Garrett County, Maryland.  There he leads various astronomy programs, does maintenance work, and leads nature walks.  He is an avid reader of Sky & Telescope magazine and has a stash of 55 years worth of issues at his home!  He still uses the chart from the February 1954 issue for finding galaxies in the Coma-Virgo cluster.  My hat is off to you Mr. Johnson, you’ve done us Marylanders proud!  May you continue to point your telescopes skyward for many years to come! 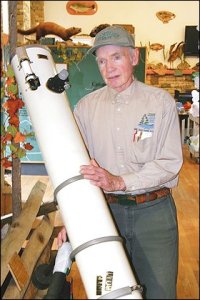