Very cool news today from Virgin Galactic!  This year will see the final stages of the testing for the first commercial joyride into space.  Ever since the Virgin Group-backed X-Prize winning ship “Spaceship One” became the first private aircraft to reach suborbital flight, we’ve been waiting for the announcement that civilians can finally pay for a ticket to space.  Virgin Galactic CEO George Whitesides said today that the two craft designed to take people to space are undergoing the final stages of their respective testing programs.  The first craft, White Knight Two (WK2) has run over 75 test flights for WK2 and 16 glide flights for the actual spacecraft SpaceShipTwo.  If you’re not familiar with the Virgin Galactic model of leaving the planet it has some large differences from how the boys over at NASA do it.  It requires two aircraft to pull it off.  The first craft, WhiteKnightTwo, is a huge jet-powered cargo plane that carries the actual spacecraft, SpaceShipTwo, under its belly.  Both ascend to an altitude of about 35,000 feet before SS2 is dropped by WK2.  After plunging for a few seconds WK2’s single booster engine ignites sending it into a 90° vertical climb away from the Earth.  Once an altitude of 100,000 kilometers is reached the engines shut off and you’re now in space!  The six passengers on board can then unbuckle and experience the weightlessness of suborbital space.  When the craft is ready to descend SS2’s “feathered” wings raise to 90° to minimize the effects of re-entry while ascending through the atmosphere.  Then just like the space shuttle, SS2 touches down on Space Port America’s runway in New Mexico. 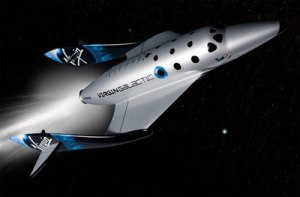 The verdict from Whitesides is that final booster tests for SS2 will begin by the summer and full-scale launches will take place in the fall.  If everything goes to plan (and it pretty much has so far) Virgin could be sending the first space tourists up by the spring of 2013!  Virgin has already booked over 400 tickets for the first year and has collected $60 million in deposits already, representing $100 million of income.  Tickets are moderately priced at $200,000 so that pretty much rules out all but the proverbial 1% from every participating in this amazing experience.  But nonetheless, Virgin Galactic represents a huge milestone in humanity’s effort to expand the limits of our world and to use space in new and exciting ways.  Hopefully the success of Virgin Galactic will usher in a wave to similar ventures that continue to push the envelope (and bring the price down).