Another Russian mission to Mars, another failure to reach Mars.  The failure of the Russian Mars probe Phobos-Grunt is but the most recent chapter in a lengthening story of Russian space failures.  The Russian space agency Roscosmos is increasingly embarrassing itself more and more with every little (and big) failure it tucks into its belt.  The once proud Russian space program is now in total shambles as they try to repair the damage done by another failed interplanetary mission.  Not only is the Phobos-Grunt failure a huge financial hit for Russia, but it is a reputation killer.  It will surely take time for Roscosmos to gain the trust of the world’s space industry after this latest failure.

The Phobos-Grunt Mars probe was launched on November 9,2011 and was supposed to shoot off to Mars from low Earth orbit, LEO, as Mars reaches its closest point to Earth.  The failure occurred during the transit in LEO when the engines were supposed to ignite and propel the probe into its Mars-bound trajectory.  The engines did not light and the probe was stranded in Earth’s orbit.  For two months Roscosmos tried to regain control of the stranded probe but were unable to re-establish communication.  Then finally, yesterday, the probe lost orbital velocity and began to fall out of orbit sending it engulfed in flames back down to the surface.  While most of the 14.9 ton probe burned up upon re-entry, the remains fell into the Pacific Ocean Sunday about 800 miles west of Chile.  The spacecraft was carrying a full tank of toxic liquid propellant because of the lack of engine burn but it is believed that it all vaporized about 60 miles above the surface due to its low boiling point.  Phobos-Grunt was also carrying a small amount of the radioactive metal Cobalt-57 but the Russian space agency said that it poses no threat of contamination. 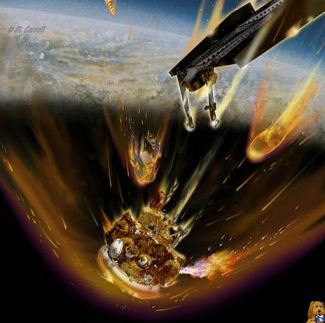 Perhaps the most embarrassing aspect of the Phobos-Grunt saga was when the Roscosmos started pointing the finger at other countries for causing the failure.  One finger, specifically, was pointed at…you guessed it…the United States claiming that we used our military and surveillance satellites to interrupt communications with the probe.  According to Roscosmos it is very easy to use a satellite to cut off communications with a spacecraft being controlled by computers on the other side of the world.  While they’re correct in that observation you can’t help but smack yourself on the forehead!  Why on Earth would anybody want to sabotage a spacecraft heading towards Mars when the international space community has been united for over 30 years for mutual scientific advancement and understanding of our solar system?  It’s just laughable that they would try to brush off their own technological failures on another country when the Russian space chief admitted that the mission was ill-prepared but gave the mission the green light due to the limited window of opportunity for the Earth-Mars transit.

In my opinion, this news is worrisome for the United States.  The Russian space program seems to have fallen from grace and its once proud standard of excellence.  This is the same country that put the first satellite into orbit, put the first human being into space, and so many other monumental space advancements.  We even rely on Russian Soyuz rockets to transport our astronauts to the International Space Station since the Shuttle program is no more.  What happens when a Soyuz rocket explodes carrying American astronauts?  We rely on the the Russians for our space exploration and we can’t afford to allow their sometimes sketchy preparation and detail overlook to compromise American lives and science.  Russia really needs to get their act together as a space-capable country.  If NASA, the ESA, and the world’s confidence in the Russian space program has not been shaken I would be deeply worried.  Phobos-Grunt’s failure could be the beginning of a far worse story if they don’t start to cover all their bases and do their homework before every mission, whether great or small.  The world depends on them to be reliable and in the extremely dangerous realm of space exploration the smallest detail can lead to catastrophic and deadly results.