Over the past century there has been one major casualty of urbanization and and afterwards urban sprawl:  dark skies.  The over-illumination of cities, suburbs, and now even rural towns has caused most Americans to completely forget about the night sky.  A majority of the people born since 1950 probably have never seen the spiral arm of the Milky Way or the galactic center at night and it is most likely a forgotten memory to those over 70.  Many people living in cities are lucky to be able to see Polaris and even Sirius, if anything at all.  For those downtown, the sky is a dark purplish-pink color all night long.  I live in Perry Hall, MD which is a suburb of Baltimore approximately 10 miles from downtown.  My favorite dark sky site so far is in Jarrettsville, MD which is about 25 miles from Baltimore and the pinkish glow from the city is still very much visible in the southwest washing out almost all the stars on the horizon. Astronomers daily feel the pain of light pollution, but so do all citizens in the country, not in their telescopes but in their wallets. 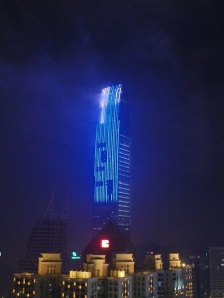 KingKey Tower in Shenzhen, China. Is that REALLY necessary?

On average each year over-illumination of cities and towns wastes an amount of energy equivalent to that of over 2 million barrels of petroleum!  That is mind blowing!  Imagine how much cheaper your gas could cost if we didn’t use streetlights that send their light straight up into the sky or if we kept those skyscrapers more dimly lit!  Your city or municipality could save a ton of money on energy if they just used it wisely!  The worst part about over-illumination is that most of the light pouring from our cities absolutely goes to waste.   The light wasted shoots upward into the atmosphere where it creates a haze of unnatural color in the night sky obliterating all but the brightest stars from view and jacking up energy rates and emptying your pockets.

There are many viable solutions out there to reduce the amount of light pollution in our skies.  However, since lawmakers and society in general are unwilling to accept an overhaul to the way we light our lives, and overall slow moving, any meaningful change looks unlikely in the near future.  It is projected that by 2025 over 75% of the country will not have access to a reasonably dark sky, compared to slightly less than 50% today.  Although, compared to Europe we’re slightly ahead of the game.  Less than 10% of Europeans have access to a dark sky that is viable for star viewing, let alone astronomy of any sort.   It is an extremely sad consequence of the culture we live in today where technology and human achievement come before natural beauty.

Many towns a few cities across the country already use energy and waste efficient lighting on streets, shopping centers, retailers, and homes but in order for any noticeable progress to be made a nationwide effort must be started.  It begins with installing waste reducing lights along highways and streets in major cities.  Lights that filter the particles straight downward onto the area desired instead of shooting it in all directions.  This would allow for less powerful lights to be used since the needed light is focused directly toward its target.  People will next complain that such an program would be too costly to implement but in reality prices for efficient lighting have dropped over the years as more people utilize them.  Now the price gap is almost negligible.  To stay brief, the point is that efficient and environmentally friendly lighting is highly attainable and has great potential to improve and preserve the natural beauty of the night sky.

As is the case for all civic issues, the best thing to do is to contact your lawmakers and let them know where you stand.  You can even suggest to them that they propose a piece of legislation in session.  If you live in Maryland the legislative session begins on  1/12/12 (this Thursday).  You can also visit websites such as http://www.darksky.org to learn more about light pollution and potential solutions.  Organizations like the International Dark-Sky Association need all the help they can get so do what you can and take action!

Lighting suppliers such as LampClick.com are also taking steps to educate the public about the effects and solutions of light pollution.  Companies such as LampClick that are aware of the problem and willing to offer solutions should be seriously considered when designing outdoor lighting for your home or business.